16. 10. 2020
As in other industries, so in the world of beer we can come across various specialties and attractions that can surprise many. Here are three of them you may have had no idea: 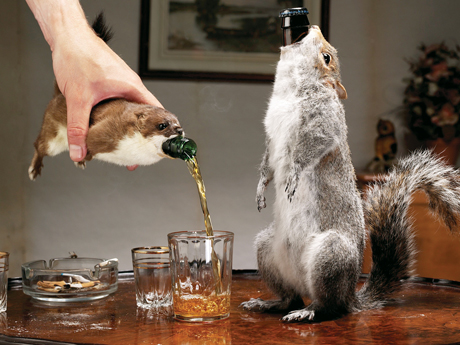 The strongest beer in the world: Forget boring and undifferentiated lagers, the strongest beer in theworld has a "volume" of 55% alcohol, is called "The End of History" and was produced by the Scottish brewery BrewDog. The bottles, which were stored in the prepared bodies of squirrels and ermines, were produced only 11 pieces (all of which have already been disassembled), and connoisseurs and collectors had to reach really deep into their pockets, as the bottle was sold for $ 20,000.

The oldest still functioning brewery in the world: The Weihenstephan brewery near Freising in Bavaria is the brewery that is considered to be the oldest in the world. This brewery was established at the monastery of the same name and beer was probably brewed here as early as the 8th century, however, until the beginning of the year 1040 the monks received official permission to produce and sell beer. At the beginning of the 19th century, this brewery became the official supplier of beer to the Bavarian court and since 1921 it has been under the control of the federal state of Bavaria.

The strangest beer ingredients: A well-known saying says that there are no limits to your imagination, and obviously this also applies to the production of beer, because brewers, especially some artisan breweries, can literally rule out inventing specific tastes for their beers. For example, the Oyster Stout beer style, which is produced under the name "Pearl Necklace" and the brewery from American Maryland, Flying Dog, has, as the name suggests, an oyster extract, which is said to give it a very characteristic slightly salty aroma in the aftertaste. This applies to special stout, so it is necessary to mention Milk Stout, which has lactose, ie milk sugar. This ingredient is often used, for example, by the Australian brewery from Sydney Moo Brew, but some craft breweries also add candied fruit, peanut butter and vanilla in addition to lactose. The ancient ingredient in beer production is the so-called "Gruit". Today, this is generally used to describe beers that are brewed without the use of hops, but otherwise it originally refers to a special mixture of spices and herbs, used in the Middle Ages, before hops spread. Wormwood, juniper, lavender, yarrow were often eaten, but also heather, which is popular mainly in Scotland. There is currently only one brewery in Europe that specializes in this segment, the Gruut brewery in Ghent, Belgium.