Modern beer production using yeast was described in 1876, Louis Pasteur in his work A Study of beer. Yeasts are unicellular fungal organisms and are widely used in the food industry, especially in the production 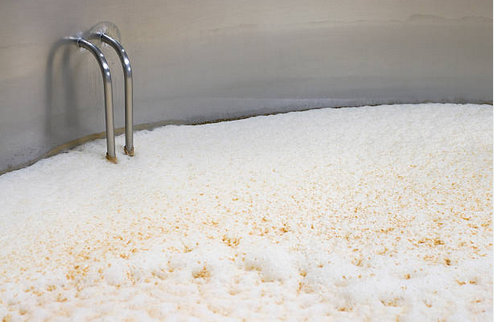 of beer, wine and other alcoholic beverages, the production of which uses the main capability of yeast: Fermentation.

Top fermentation in beer production: Top fermentation is based on how yeast behaves at the final stage of the main fermentation. The top yeast produces a "crust" on the surface. Top-fermented beers are produced at temperatures of about 15-20 ° C using yeast Saccharomyces cerevisiae subsp. cerevisiae or by spontaneous fermentation. It is used to produce all top fermented wheat beers. The resulting yeast is collected from the vat level and the fermented wort is subsequently stored in barrels or tanks where it matures at natural or cellar temperatures for several days to months.

Bottom fermentation in beer production: Bottom fermented beers are produced by fermentation, which takes place at lower temperatures ranging from 8 to 14 ° C. Yeast from strain Saccharomyces cerevisiae subsp. uvarum. Subsequently, the beer lies for a month or more at temperatures close to zero. Bottom-fermented beers include most of the world's production, including most Czech production.

The primary difference between lower and upper yeasts (except sensory perception) is in their ability to process carbohydrates composed of galactose, fructose, and glucose - to process all the sugars that occur, thereby achieving better fermentation. Outer yeasts do not have this ability, and as a result, top-fermented beer is usually sweeter with lower levels of alcohol available. Top-fermented beers are the bearers of varied exotic fragrances and flavors, even without the addition of other ingredients, thanks to the higher fermentation temperature. Bottom fermented beer has a higher alcohol content, a clearer color and a more straightforward, typical taste. Cheers!