Kombucha is a name that sounds quite exotic and mysterious, but many of you have already encountered it. In short: Kombucha is a functional food, usually a slightly fizzy fermented beverage, made 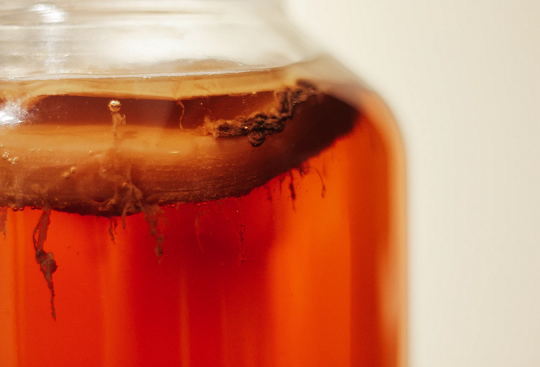 from sweetened green or black tea. Symbiotic colonies of yeasts and bacteria, for which the abbreviation SCOBY is used, are used to ferment the beverage.

Kombucha culture is formed by symbionts of acetic bacteria mainly of the genus Lactobacillus and also by certain species of yeasts, most often they are yeasts of the genus Zygosaccharomyces. The cohesiveness of the kombucha culture colony is ensured by the cellulose produced by the acetic bacteria. The culture has a gray-brown color and the consistency of a viscous jelly-like coating. The young culture has a lighter color, which gradually darkens over time. Lifetime is usually under optimal conditions around half a year.
Kombucha is nothing new in our latitudes, it appeared in our territory at the beginning of the 20th century and was probably imported by officials working in the diplomatic service.

Surely you are now wondering what it's all good for… Experts' opinions vary and its medical benefits have not yet been scientifically confirmed, but its users, in addition to an interesting sweet and sour taste, also highlight its beneficial effects on the digestive system and bowel cleansing and general beneficial the effect of the vitamins contained and effects similar to those known from other fermented beverages.

Kombucha can be made relatively easily and successfully at home. You will only need a few commonly available ingredients, most of which you will probably have at home. We first need quality tea for kombucha. Black tea is best for propagating kombucha culture, which can be mixed with green in a certain ratio. Flavored teas should be avoided. Let the tea brew in hot water, then sweeten it with honey or sugar, mix thoroughly, let it cool to room temperature and then add kombucha culture, which we either bought or received from someone who grew it himself. This is followed by a two-week maturation of the drink. It is good to ferment the optimal amount of sugar so that the resulting drink is not too acetic acid.