Another absolutely key raw material for beer production is hops. Hops (Humulus) are a genus of plants of the Cannabidaceae family (Cannabidaceae). Its fruit is a hop cone. Known representatives include the 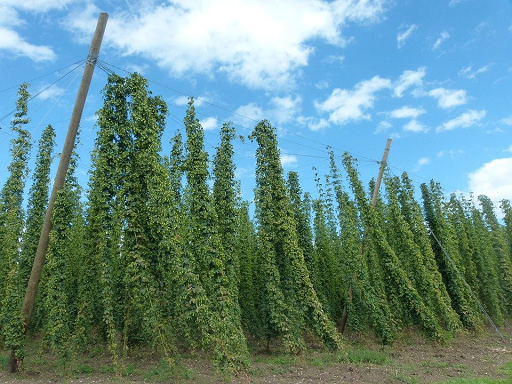 rotary hops (Humulus lupulus) used in the beer production process, as well as the Japanese hops (Humulus scandens). Hops is a perennial plant that produces about 20 to 30 years. In the brewing industry there is an unfertilized inflorescence in which all the essential substances are contained, therefore only female plants are used.

We distinguish three basic types of hops: Greenery - whose vine is green, Reddish - whose vine is red to red-violet and then Semi-reddish with green vine and reddish petioles. Hops are further divided into early, semi-early and late varieties. Last but not least, we also divide hops by region or country of origin. In the Czech Republic, for example, only red breams are grown almost exclusively. Probably the most celebrated and the most appreciated hops in the world is “Žatecký” semi-early reddish type, whose exceptional quality is given by the optimum ratio of substances contained in it.

Hops are gradually added to the beer during the so-called hop-brewing phase, during which the malted wort is brewed. The most important components of the hops are resins, tannins and essential oils, and it is the hop resins that give the beer bitterness. The tannins at the hopping plant precipitate proteins and thus purify the beer - this phenomenon is called "quarry". The combination of resins and essential oils gives the beer a typical smell and depends on the type of hops used and where it comes from. The bitterness of the hops and the boiling time of the hops also have a significant influence on the bitterness of beer. Sometimes, especially in the production of strong, bitter, top-fermented beers, dry or cold hopping is also used, when aromatic hops are added even during the time of lying of already fermented beer.

Nowadays few brewers use classic hops in the form of compressed cones (only Budvar makes it from all the large breweries in the Czech Republic), but it is more common to use hops in the form of granules. These are small pellets, which are composed of crushed and pressed hops. There is no difference in taste between the granulate and the cones. Relatively frequent is also the use of hop extracts, which serve for example for better foaming, regulation of bitterness or aroma intensity.